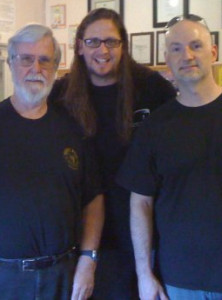 Here’s a picture from 2009 with our dear friend Jay Dooling, longtime co-host of “Irish Aires” on 90.1 FM KPFT Houston who passed away Saturday night. Jay was a huge figure in Houston’s Irish community and one of the biggest supporters Blaggards ever had. On Irish Aires he was the first DJ, along with co-host Pete Little, to play selections from “Standards” on the radio. Jay tirelessly promoted our shows on the air every week for years, and was in the audience every chance he got. Some of you may remember that before Blaggards there was a band called On the Dole… Jay loved that band, too, and was there for their very first show, as well as the first shows Blaggards ever played back in 2004. His support and enthusiasm for what we do always meant the world to us. We will miss you, Jay.